If you can’t handle the cuteness of little bear cubs – look out! The Pennsylvania Game Commission has a live-stream camera on a female black bear (called a sow) denning for the winter. This sow picked a spot under a house deck in Monroe County, PA as it’s cozy den to hibernate for the winter. We’ve been able to watch her and her new cub napping, nursing, and the mom just trying to keep the little one out of trouble.

Here’s a screenshot we got recently of mom and cub. 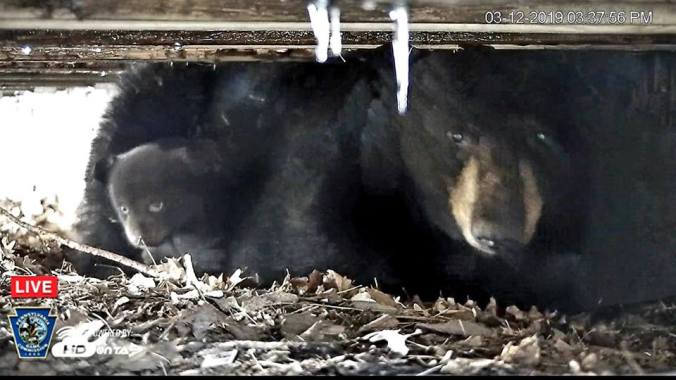 Even though we think of hibernation as being asleep, black bears aren’t entirely oblivious to the world. During this time, their heart rate and metabolism do decrease but they will still get up occasionally to move around. In fact, sows give birth and nurse their cubs during hibernation. Usually around early April, mom and cub will leave the den and not return. After that, they’ll take to the woods where the mom will teach her young one to climb trees, find food, and deal with danger.

Beyond just seeing cute footage of the cub, this camera, and similar ones, are a cool way to witness an aspect of wild nature that most of us never get to experience. It’s much safer for the bear and us watching from a camera. The PA Game Commission wants to remind folks that these are indeed wild animals and to respect the privacy of hibernating bears. Especially don’t bother a bear that is in its den even if it’s just for a quick look at a cute cub. First of all, who wants a 250-pound angry mom running at us??? Second, a sow may abandon her den if she suspects it’s been disturbed, which will likely result in the cub’s death. One other thing, don’t attract bears with food. It’s illegal in PA and furthermore will likely cause a bear to become too comfortable around humans and it will be considered a dangerous nuisance. The unfortunate result of that is often a dead bear. So, learn all that you can about PA wildlife, but please remember that these are wild, and sometimes unpredictable animals. And that is one of the reasons that we find them so inspiring!

Even if you don’t hunt, consider getting a license from the PA Game Commission or PA Fish and Boat to support all of the wildlife research, management, and conservation that these state agencies do all year long.

The den camera itself on HDOnTap.com!

Learn about lots of other PA wildlife

And finally, find a state park to see some amazing nature!