During the past few weeks I’ve gotten to go on a few outdoor adventures with my wife.  She’s truly the perfect adventure partner, always up for getting dirty or sweaty, equally enjoying chasing some bird down a trail to snap a picture or making a coffee stop.  And she knows quite a bit about what we’re looking at while outdoors (Maria: he’s being sweet). 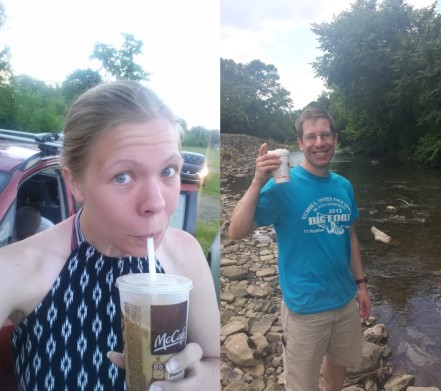 I’ve always found many positive things in the outdoors, solace when getting over a heart-ache, adventure while orienteering, quiet conversations while fishing with my family, and the chance to push my physical limits when biking and running.  A new aspect I’ve recently started adding is that of an aspiring naturalist.

END_OF_DOCUMENT_TOKEN_TO_BE_REPLACED

When I parked my car in front of the refurbished old school building that is now the Energy Innovation Center, my eyes were immediately drawn to the pollinator gardens dotting the parking lot. Oh, this is going to be a good afternoon, I thought. And I was not disappointed. I was there to catch up with Dr. Andre′ Samuel, a fellow Duquesne University alum, who received his Ph.D. in biology and took his degree in a direction no one has ever thought of in career counseling.

END_OF_DOCUMENT_TOKEN_TO_BE_REPLACED

When I was a kid, I had a burning desire to see how much electricity was in a bolt of lightning. I didn’t understand watts, volts, amps, or Ohms yet. All I wanted to know was if those bright streaks that crashed to the ground were strong enough to power a light bulb. END_OF_DOCUMENT_TOKEN_TO_BE_REPLACED

I just wanted to give you all a heads’ up that I changed the name of my blog. Originally, I started with the title “The King’s Nerdy Daughter” a few years back during grad school, when I wrote maybe two posts a year. Now that I have a bit more of a plan of what I want to do with this blog, though, I thought it was a good idea to shake things up a bit. The new name for my little kingdom of words, as you can see above, is “Linnaeus and the Lamppost.” So, eh? How did I come up with that? Well I’m glad you asked!

The first part of the name came from the Father of Taxonomy, Carl Linnaeus (also known as Carolus Linnaeus and Carl von Linne). He was a well-rounded scientist of the eighteenth century– a botanist, zoologist, and an explorer–and he developed the binomial nomenclature system that we use to name species today. Though he was proficient in a variety of disciplines, he is best known for his expertise in biological fields. Since this blog will definitely always have a biology slant, I thought that he was an appropriate figure. Besides a nod to a great naturalist, the name also reflects a bit of my Swedish heritage, as Linnaeus was himself from Sweden.

The Linnaeus house in Uppsala, Sweden (I’ve been there!) Wikimedia Commons

Psalm 119:105 “Your word is a lamp unto my feet and a light unto my path.” Since my goal in renaming this page was to reflect that faith and science are an important part of who I am, I wanted a phrase or a word to represent my faith. What does a lamp do? It illuminates, it shares light, it reveals truth in darkness. If I can share a bit of what my faith looks like through my wonder of the natural world, then I will consider my efforts a success. Plus…there was a lamppost in Narnia. ‘Nuff said. 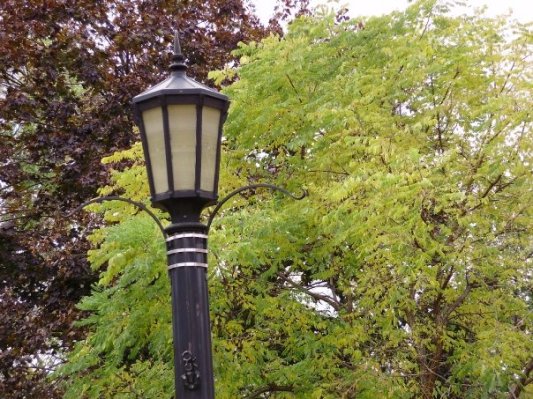 Eventually I will shift my material over to a new domain name, but I will keep you all in the loop for when that happens.

In the meantime, keep exploring!

About a year ago, I wrote a blog post on how to tell if information sources are trustworthy or not. Since repetition helps information retention, I decided it was time to revisit an updated version post. Especially now as we are approaching election season, it is critical that we are relying on trustworthy sources to give us accurate information. There’s a lot of junk out there, but we can sort through it together. END_OF_DOCUMENT_TOKEN_TO_BE_REPLACED

I don’t think I can remember my first trip to a zoo. My family visited the Columbus Zoo often when I was little, and the numerous visits have blurred together over the years and decades. What never blurred, though, was my love for the animals I saw on each visit. I remember parking myself at the gorilla exhibit over and over, and the awe never diminished. I had read all about these animals in the library books I regularly hoarded, but to see them live, in front me…to realize how powerful and how intelligent they were…to see how the silverback Mumba interacted with his family, sometimes playing with the young ones or chastising them when they got a little too goofy for his breakfast time preference…to see how curious they could even be about us humans…what a beautiful thing. Even as a child, I wanted to show the whole world how precious these creatures were. As I grew older, that passion to inspire love increased especially as I learned more about their decline in the wild and its implications. END_OF_DOCUMENT_TOKEN_TO_BE_REPLACED

Last week, a group of Nobel laureates sent a strongly-worded letter to groups opposing genetically modified foods, urging the groups to look at scientific evidence when considering life-saving foods for impoverished countries. The bulk of the letter focused on opposition to Golden Rice, a GM strain that could provide essential nutrients to some of the poorest in Asia and Africa, yet it is heavily opposed by influential groups such as GreenPeace. Frustration in the letter-writers was clear especially in the closing when they ask “How many poor people must die before we consider [opposition to GMOs] a crime against humanity?” END_OF_DOCUMENT_TOKEN_TO_BE_REPLACED

Friends, family, and readers! I’m interested in getting a bit of background information on the folks who regularly or occasionally read my blog. (Or heck, even if you’ve never read it, but you were intrigued by my dazzling flowery banner at the top.) My goal is to learn a little bit more about all of you so that I can better meet your interests and reading needs.

Once you have taken the survey, either message my Facebook blog page or comment “Done!” on the Facebook share. On Wednesday, July 13th, I’ll randomly pick one person to win their choice of either $10 to Starbucks or two tickets to the Carnegie Museum of Natural History. (And to ensure it’s random, I’ll use a spreadsheet.)

Thanks so much! Keep exploring!

Well, ladies and gentlemen, we did indeed find wildlife on my trail camera! It was mostly deer, but I still think it’s a great way to visualize the natural world around even a suburban area. 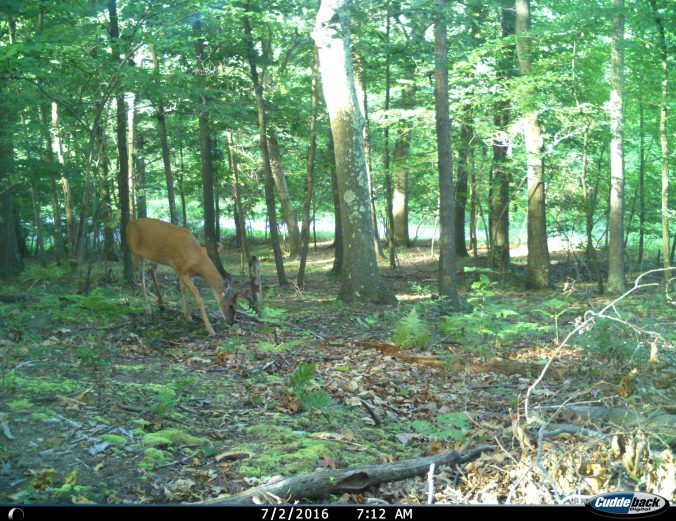 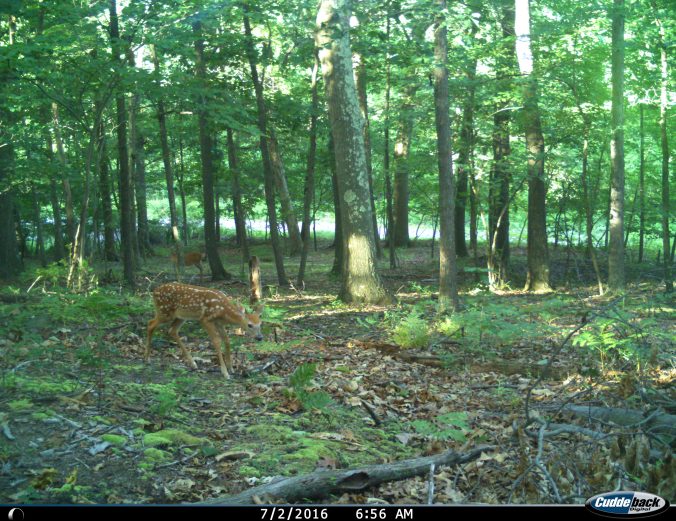 Just a little fawn, still adorable with her spots 🙂 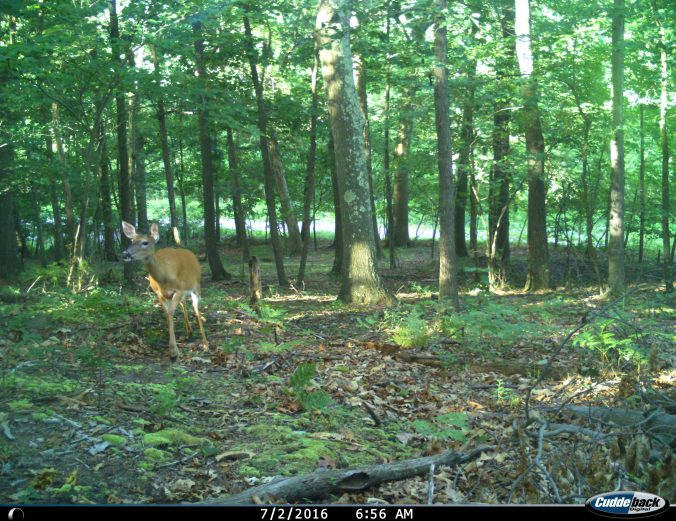 Think she spotted the camera?

Gettin in that Saturday morning jog!

Bonus Footage: I think a train went by. Or did the neighbors leave their fire-breathing dragon out again?

Bonus Footage: This must be from when I dropped the camera during the set-up process. Looks like swirly fun in an impressionistic dream kind of way.

I’m going to leave the camera out for a bit longer, and I can keep you updated if I find anything else exciting!

In the meanwhile, if you are interested in some hands-on field work, but with the help of naturalists and scientists, the National Park Service is holding a series of BioBlitzes across the country this year in honor of 100 years of parks. BioBlitzes are a citizen science effort of conducting biological surveys in a short period of time. They are a great way to go on a guided exploration of biodiversity, plus they can be a huge help to keeping inventory of all living things in the focus area–from animals to plants to fungi, everything! Many of the BioBlitzes occurred in May, but different parks around the country are hosting their events all the way until later in the year. The map on the NPS page will help you search for BioBlitzes near you.