Most of the content below was from a post I originally shared in 2016. The gorilla in focus passed away earlier last year, and the foundation where she lived has been embroiled in legal battles over their remaining gorilla ever since. Those human squabbles have kept the gorillas in my mind, though, and I wanted to bring up these ideas again. We share this planet with these magnificent creatures, and we have so much power over what happens to them and their homes, we at least owe them this sheer wonder! 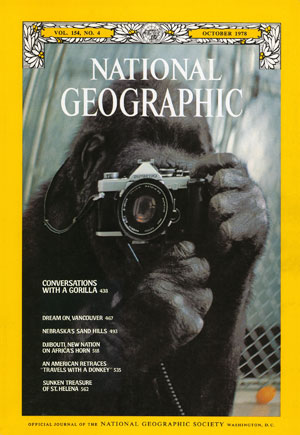 In 1999, PBS released a Nature documentary called “A Conversation with Koko”—a feature all about the story of a Western Lowland gorilla named Koko and the primary researcher behind the communication efforts, Dr. Penny Patterson. Dr. Patterson had begun teaching sign language to Koko all the way back in the 1970’s and was still working with her and two other gorillas on a daily basis. Through their unique abilities, the gorillas were able to share their personalities in a way few animals can, and it was fascinating to watch their progression from their first three signs “eat,” “drink,” and “more” to thousands of complex words and phrases.

Being the little animal nerd I was/am, that VHS documentary became one of my favorite things to watch, and I was constantly on the look-out for more stories and information about this signing gorilla. I just couldn’t get enough of learning how Koko would express her preferences or frustrations and how she would make up signs for words if she wasn’t given one! Even this past semester, when I taught an animal behavior course at a nearby college, I included the video in the section on animal communication.

But, oh boy, was I excited! A few weeks ago, PBS produced a follow-up to their original feature—an update on Koko—“Koko: The Gorilla Who Talks.” And this time, the documentary included more insights to Dr. Patterson’s career and the origin of her project with ape communication. Watching the update, I felt the same excited response that I did years ago when the original documentary came out (and still feeling the intense envy of Koko’s care givers and every celebrity who has ever met her).

Yet now, watching the old documentary with my students and watching the new documentary on my own, now I understand—ever so slightly—the criticisms of Dr. Patterson’s work. That’s not to say I necessarily agree with her critics, but I understand them more. Did she really teach a gorilla how to truly communicate using human language? Or did she teach a very intelligent gorilla how to appropriately respond to our various human communicative prompts and cues just at a higher level than any other trained animal? Do animals have the intellect and the ability to communicate complex ideas and thoughts? Can they share their ideas and thoughts with each other? Can they share with humans?

To look deeper into this, let’s backtrack a bit and break down two main categories in communication: referential and affective. Referential communication is based on the relationship between words or symbols and the ideas, objects, and events that they represent. If I verbally told you “The coffee shop down the street from me makes a great iced mocha,” you as an English speaker can visualize a general coffee shop (or you might even know the specific one I’m talking about) and you understand that an iced mocha is chilled coffee+chocolate goodness poured over ice and most likely served in a cup. I doubt you pictured someone handing me a drink in a bucket, or wine glass, or sippy cup, or bowl or any other random container. The phrase “iced mocha” in our vernacular is common enough that you could picture the beverage and how it was most likely served. That is an example of referential communication.

Affective communication is a bit different; it’s communication based on emotions. Crying, smiling, laughing and screaming, for example, are all forms of affective communication. You aren’t necessarily getting any of the “why” or “how” about a situation, but you can certainly see whether or not Little Timmy is happy as he wails in his car seat or if Lucy is having a good moment as she laughs with a group of friends. If you’ve ever wondered why you feel compelled to use emojis in a text message, it’s most likely because you know that referential communication alone (i.e., the actual text of your message) is likely not conveying the emotion behind what you’re saying in your brief text or tweet, but adding emojis enhances emotion and intimacy in digital communication.

Any pet owner probably has no doubt animals can communicate affectively. Think about your dog’s behavior during a thunderstorm or when your neighbor (ahem, or you) is setting off fireworks of questionable legality on the 4th of July. How is Fido responding? Possibly shaking, shedding, panting, hiding in a closet or under a bed? Fear is fairly easy to read across species.

But can animals truly communicate referentially? Are they able to convey a specific concept or idea through their interactions? If we look at animals in the wild, there are definitely some examples of animals responding with amazing specificity to different forms of communication. Alarm-calling, for example, is important in a number of social species. This is when one member of a social group gives a vocalization to warn group members of approaching predators. Beyond even that, in meerkats, for example, alarm calls can alert family members not only to the presence of a predator, but the alarm call somehow includes information about whether the predator is terrestrial or avian—which prompts very different responses in the receivers of the message (makes sense, hiding from a bird is a different matter than hiding from something on the ground.) This suggests animals can indeed use some sort of referential communication.

We get stuck, though, when we try to tease out the idea of whether or not animals are using a reference or a representation. A precursor to language is that the individual producing a signal or message must be able to evoke the representation of that message in the receiver, the one receiving the signal or message. Earlier, when I gave you the phrase “iced mocha,” that produced a representation in your mind’s eye about an iced mocha. Can animals do that for each other?

I’ll admit that I’m not a linguist or communication expert by training, but I think this is where animal behaviorists are getting stuck with animal communication—even animals as impressive as Koko. Terrace Herbert, one critic of Patterson’s work used to study the possibility of sign language communication in chimps himself, yet (as he discusses in the new Koko documentary) he eventually came to believe that what he was seeing with his chimps was simply elegantly trained animals who had learned to respond to the prompts of his caregivers and trainers.

I don’t know though…I might side with Jane Goodall on this one. In her awesome book, In the Shadow of Man, (read it, read it, read it), she describes her own thoughts on hearing of a chimpanzee named Washoe who had also learned sign language:

“I have not seen Washoe, but I have seen some film demonstrating her level of performance and, strangely enough, I was most impressed by an error she made. She was required to name, one after the other, a series of objects as they were withdrawn from a sack…{When} a brush was shown to Washoe, she made the sign for a comb. That to me was very significant. It is the sort of mistake a small child might make, calling a shoe a slipper or perhaps a plate a saucer—but never calling a shoe a plate.” 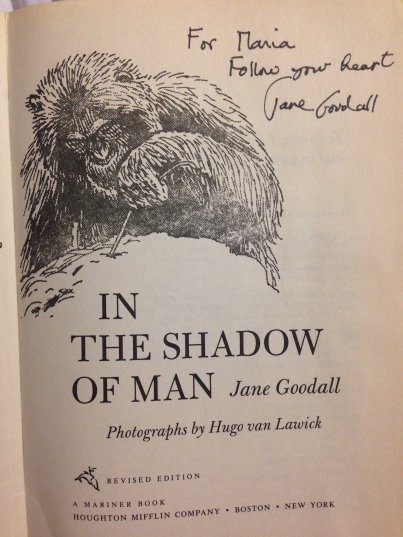 See what Goodall is getting at? Washoe knew both the words “brush” and “comb,” but, yeah, she goofed a bit and called a brush a comb. That kind of mistake, though, shows that she understands not only the name of the item but the purpose of the item. If the types of mistakes she made were to accidentally call any noun by any other random noun’s name, it would show that she was simply associating a list of items with a hand gesture. Rather, her mistake shows an understanding of the deeper connotations of the items she was presented with. To me, that suggests the possibility of referential communication.

Of course, it’s entirely possible that we’re over-thinking that observation. I would rather you get the chance to watch the two documentaries yourself and make that call, or at least enjoy the process.

The bigger question is…so what? Why does it matter? Who cares if Koko can tell you that she likes kittens but not some vegetables? What matters, at least to me, is that when I see how smart these gorillas are—whether they really are truly using language or are very well trained—it makes it even harder for us to justify not protecting them. Koko is an ambassador for her species, and for other species of gorillas. They are endangered in the wild for a number of reasons, but some of it is even our fault here in the US. For example, the batteries in our electronic devices such as iPods and cell phones contains a mineral called coltan. Coltan can only be mined in areas that overlap with gorilla habitat—which means it is incredibly important that we recycle our cell phones when we are done with them. And it certainly means that we should at least be aware of what our consumerism is doing across the globe.

I guess in some ways, for me it does not matter whether or not gorillas can properly use language as we define it. I appreciate the species just for their own being. From an ecological standpoint, I hate to see disruption of natural processes and the loss of habitat. From a faith standpoint, we have been given these amazing creatures to act as stewards over; and we can either be ruthless dictators or fair and just guardians. 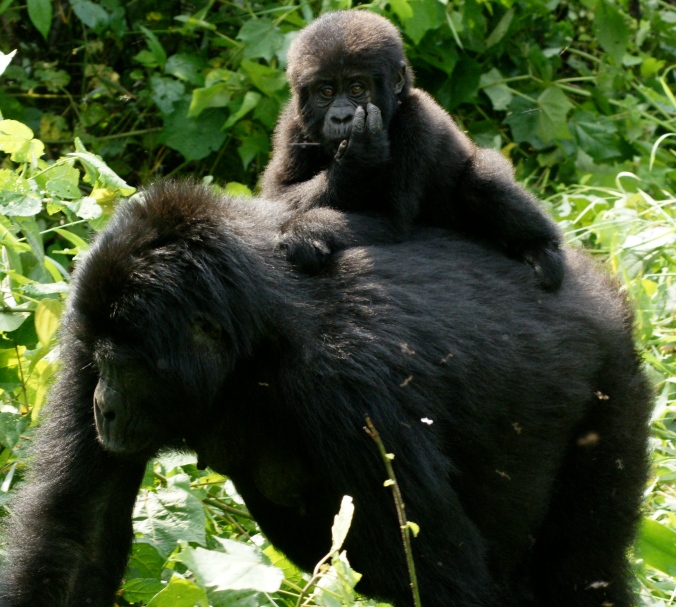 Maybe that was some of my underlying interest in Koko and her language skills…I’m partly fascinated by the intelligence and partly driven by a sense of urgency to tell the world about why her species is so special—and worth protecting. If you are interested in learning more about her, and I hope you are, check out the Gorilla Foundation’s website and be sure to watch her two documentaries. They are well worth your time!

And after all, don’t we want to keep exploring? 🙂