By Maria and Rob

Worried about conversations lagging at all of those holiday parties coming up in the next few weeks? Or positively fretting that someone will bring up the latest political scandal at Christmas dinner? Never fear! We have the perfect solution for moments when you need just a little extra loquaciousness: Christmas-themed science trivia. Your casual yet intriguing small talk will amaze your hosts and ensure that you will be invited back to fabulous parties year after year! Or be purposely not invited next year…it could go either way, really. But we would totally re-invite you.

For your conversational pleasure…

Up on the housetop, click, click, click!
Songwriter Ben Hanby was spot-on with his observation of ungulate biology: reindeer really do click when they walk. It’s caused by a leg tendon “snapping” on the sesamoid bone with each step. It is thought that reindeer herds use this sound to stay in contact in wintry white-out conditions.

*Bonus tidbit of info for 2019* reindeer are the only known mammals who can see in the UV spectrum. This is thought to, again, help in white-out conditions; the additional type of light could help them distinguish between objects that would otherwise appear as a snowy blur. (The authors of the study did speculate, though, that other Arctic mammals may also have this ability as they don’t seem to struggle with snow blindness.)

The Gingerbread Underground
Gingerbread cookies are on my top five list for this time of year, so let’s talk about that ever important ginger spice. You may have heard ginger referred to as a root, but in botanical anatomy terms, it’s actually a rhizome. A rhizome is a specialized type of stem that grows underground with roots and shoots extending out from it. (This ability to grow from a rhizome means you can actually grow your own ginger at home with a rhizome you bought from the store if you’re up for a light challenge.)

An A-maize-ing Side Dish
Many Christmas dinners are going to include corn, maybe cornbread. Did you know that the bulk of the kernel we eat is actually something called “endosperm”? It’s a starchy substance whose biological function is to nourish the little corn embryo (remember, each corn kernel is an individual seed). Bonus fun fact: the endosperm is triploid, meaning it has three copies of its DNA. Om nom!

Pass the Pie
Just before you take a big bite of pumpkin pie, remind everyone that the whipped cream on top is primarily composed of air bubbles trapped in partially crystalline fat globules with with water, lactose, and whey proteins mixed in between the bubbles. Yum yum!

Under the Mistletoe
“Mistletoe” is a common name given to over a thousand species across multiple plant families. The common denominator is they are all parasites that grow on other plants, sometimes other mistletoe. Most species of mistletoe are only a hemiparasite since they can perform photosynthesis for at least some part of their life cycle, but a few species, lacking the leaves to undergo photosynthesis, are completely parasitic.

If the thought of parasitism doesn’t slow down the holiday romance, though, the etymology of “mistletoe” just might! Apparently the name came from an archaic Anglo-Saxon dialect that combined the words for “poop” and “twig”—a reference to the observation that mistletoe often sprouts from bird droppings on branches. Ah, bird poop seed dispersal.

In case you’re like me and wonder how on earth a plant can ig into another plant and parasitize it, this video from a University of Florida extension gives a close-up look, particularly around the 1:40 mark.

Christmas Conifers
In Western cultures, evergreens were a standard winter decoration long before the introduction of Christianity into Europe. Largely a matter of practicality, conifers would still be green and fragrant in seasons when deciduous leaves had fallen and flowers weren’t in bloom, and the trees became a part of superstition and spiritual lore. The first use of Christmas trees as a specific holiday décor is somewhat disputed, but the practice may have originated in Germany in the sixteenth or seventeenth century.

Though I absolutely love the magical sight of a Christmas tree, glowing with lights and sparkling with memories in the shape of ornaments, I can’t help but nod my head in admiration of trees as fascinating as conifers. They truly can survive the most extreme environments. The boreal forests of the northern hemisphere can have exceptionally long, cold, dry winters reaching as low as sixty degrees below zero (F). In this condition, trees need to be able to protect themselves from water loss (that’s why the needles have thick, waxy cuticles as their outer layer) and they need to protect their cells from freezing by creating a sugary “antifreeze.” In the modified words of Kermit the Frog, it’s not easy being evergreen! 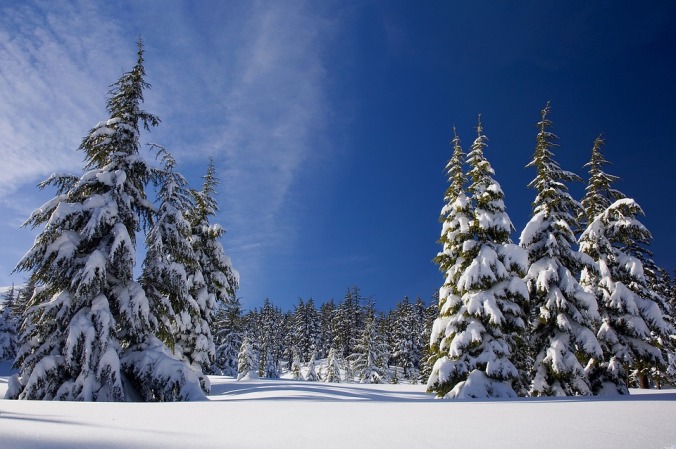 Maria’s Festive Pet Peeve
Holiday decor with penguins and polar bears. No no no no noooooo. Depending on how you roll the taxonomic dice, there are either 17 or 19 species of penguins, and they live along coastlines from as far south as the Antarctic and as far north as the Galapagos Islands on the equator. Polar bears, on the other hand, live mostly within in the Arctic Circle.  Thus, we can succinctly say that penguins live in the Southern Hemisphere while polar bears live in the Northern Hemisphere, and nary do they cross paths. I can suspend reality long enough to see a polar bear drink a bottle of Coke, but not if there’s penguins about! (Actually, I was super excited to see puffins in the last few years of Coca Cola commercials. Puffins are Northern Hemisphere coastal pelagic birds! Yes!)

But because I (Maria) do love penguins…here is an early Christmas gift from me to you:

Now then, go forth and spread nerdiness! If these don’t perk up the party, I don’t know what will.